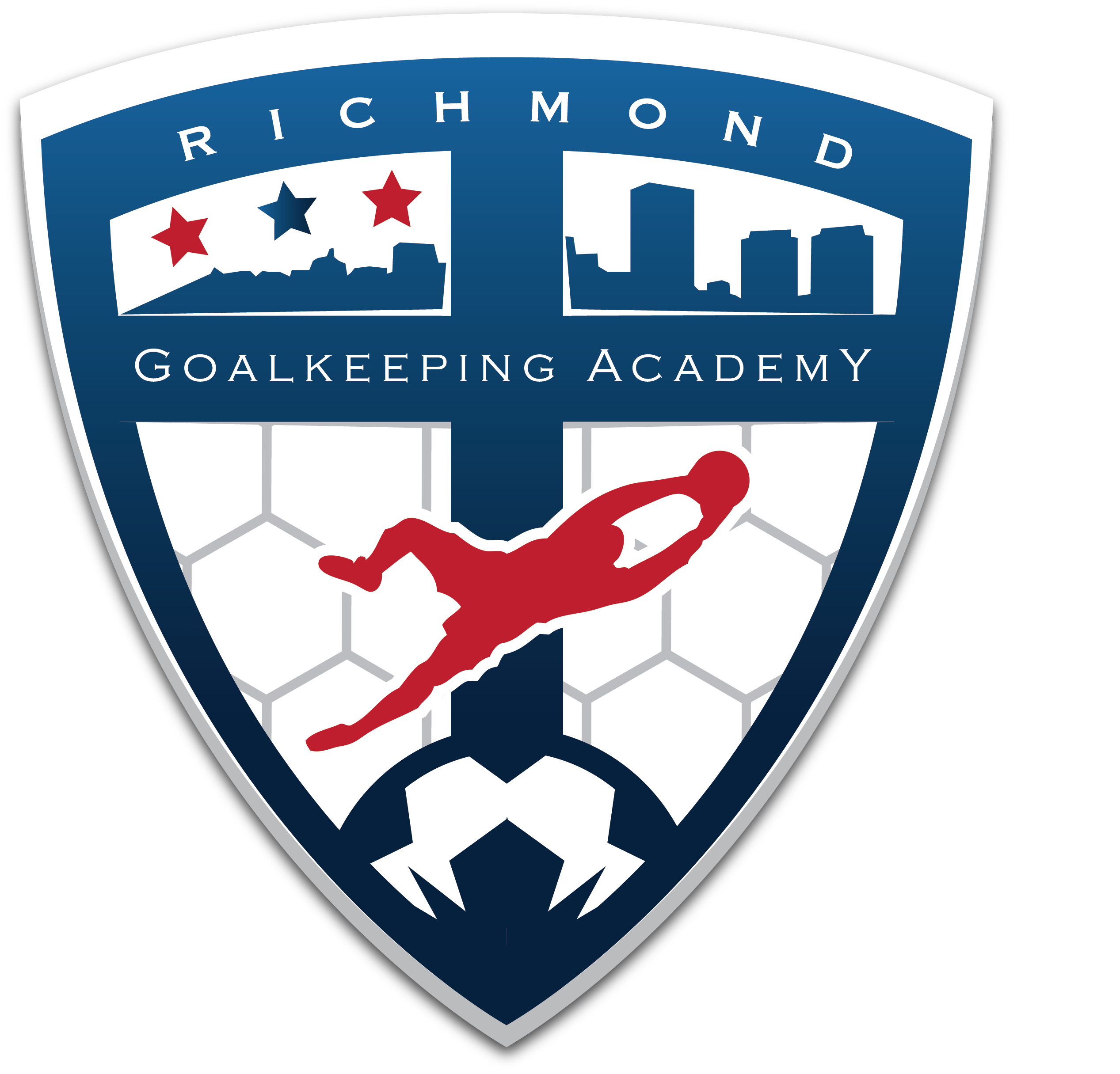 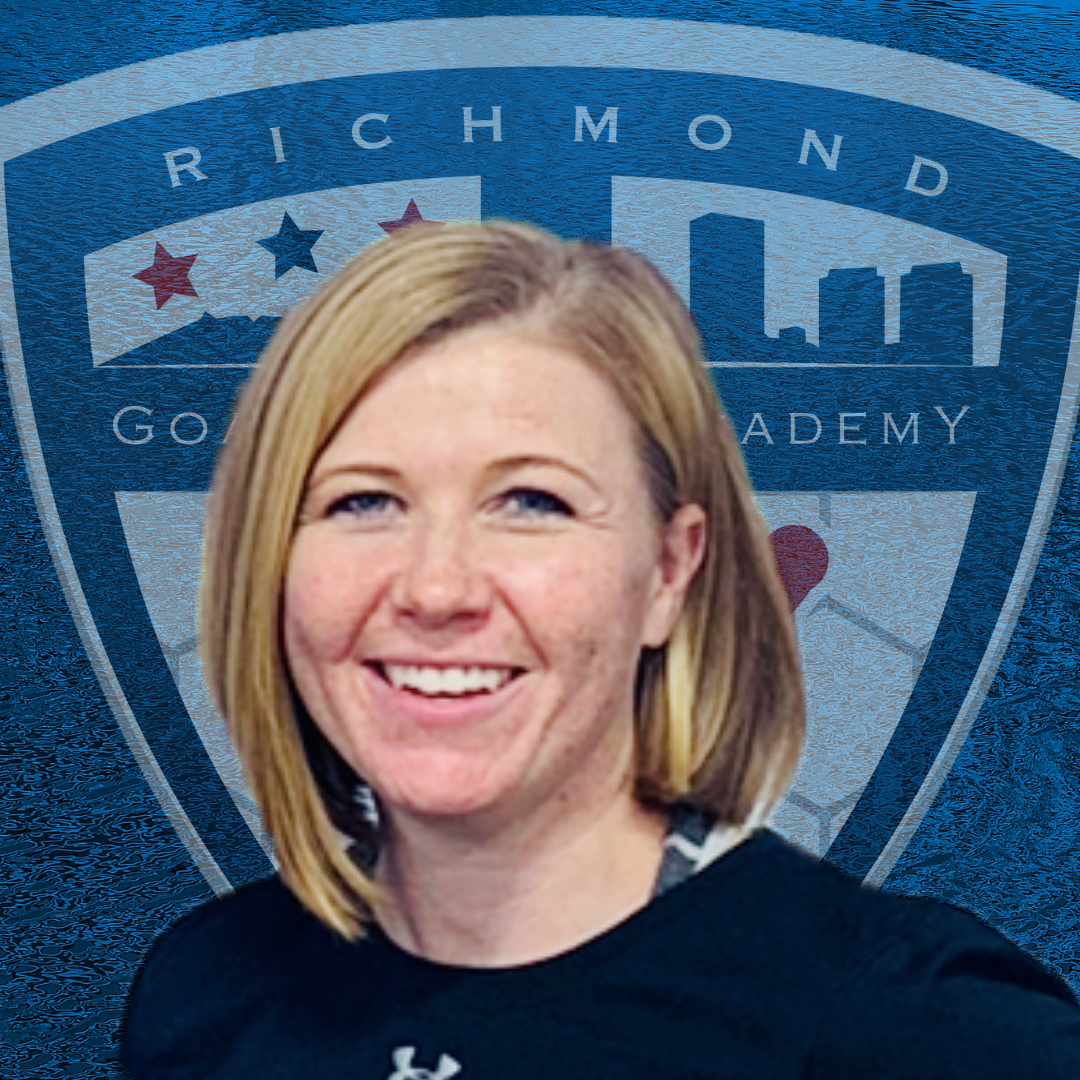 Founder and director of Goalkeeping

EMAIL AMANDA
Originally from Virginia Beach, Va, Coach Amanda has been in the soccer world for 30 plus years. More than 12 years playing experience and 18 years of coaching.  Her playing experience ranges from the United Soccer League with the Hampton Roads Piranhas 2nd team where she helped lead her team to the 2003 National Finals to  VA State ODP. Her coaching style and foundation first began with the Virginia Rush Travel Soccer Club programs, Kellam High School Varsity team, and continued through her collegiate soccer career at Ferrum College (NCAA DIII, ODAC).

In Fall 2004, Coach Amanda became the youngest Director of Goalkeeping at the age of 17 for the Old Dominion Select Travel Soccer Club. She later worked with various PDP programs and travel teams with the Roanoke Stars Travel Soccer, Richmond Kickers, FC Richmond, and offered private coaching throughout the state of Virginia.

Previously, she was the Goalkeeping Coach and Assistant Coach at Marymount University for their Women's and Men's Soccer Programs (Atlantic East Conference NCAA DIII). Additionally, Amanda currently is on the Virginia ODP Goalkeeping Staff and previously held a shared role as Director of Goalkeeping with the Richmond Kickers Youth Soccer Club Fall 2020-Spring 2021.

Amanda resides in Richmond, Va and is passionate about leadership, mentorship, and developing the next generation of leaders in our sport and community. Her background is in business development, public speaking and coaching. She has been invited to come speak on mentorship, coaching and leadership in various settings with both the youth and adults. 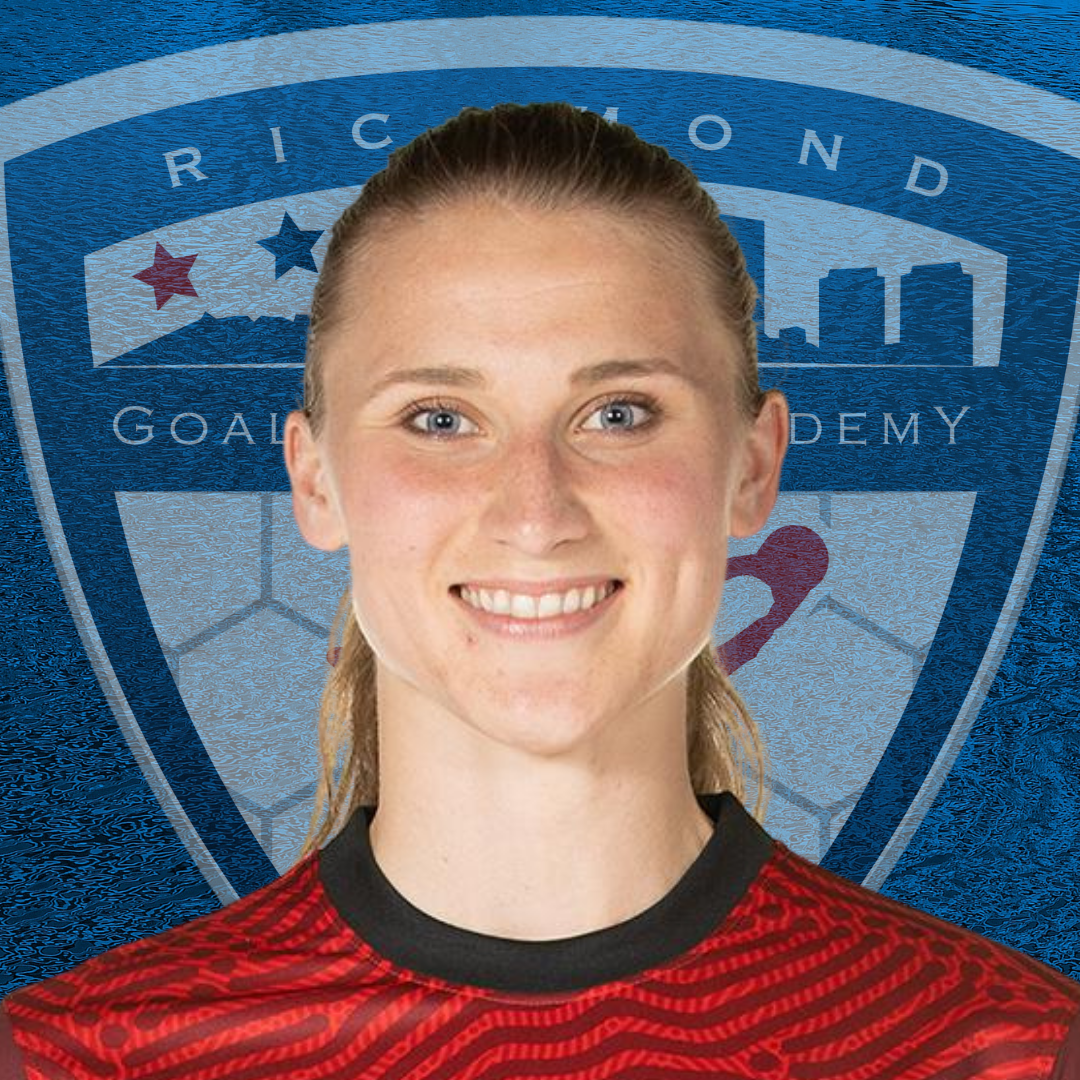 Currently one of three pro NWSL Goalkeepers for the NC Courage, Coach Sam has had a spectacular career from early on. Sam's career began in her hometown of Liberty Township, Ohio where she played for the Ohio Elite Soccer Academy ECNL girls team. Sam has been apart of the US National Team cycle since age 13. Earning her first CAP with the U17 USWNT against the U18 German WNT.  After high school she continued her career at UNC Chapel Hill playing under legendary Head Coach, Anson Dorrance and Goalkeeping Coach, Chris Ducar.  Breaking records as UNC's starting GK, she is most remembered for not allowing a goal in 1,119 minutes and 23 seconds her senior year and  she was only the third Tar Heel goalkeeper in history to win a penalty kick shootout, joining U.S. National Team goalkeeper Ashlyn Harris against Virginia in 2007 ACC Tournament and Bryane Heaberlin against Baylor in 2012 NCAA Tournament. Her six saves versus UCLA in NCAA quarterfinals matched her career high in a game.

Sam has a heart and passion for the development of RGA's GKs that is unmatched. Her dedication to their development on the field and off is what makes her unique. We are honored to have her apart of our staff and leading camps, clinics, and virtual coaching sessions. 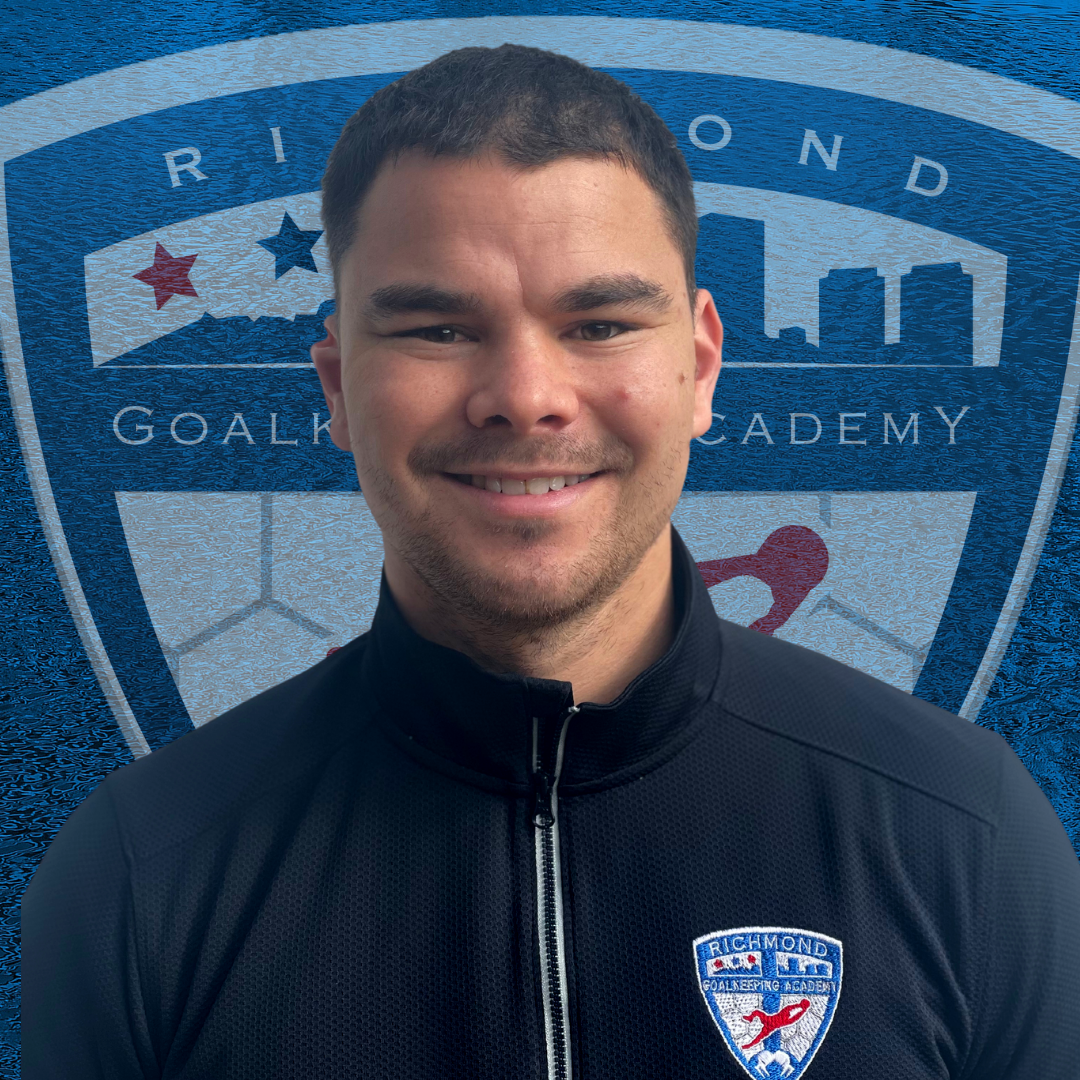 Prior to playing in college, Mario played for the professional soccer team Deportivo Saprissa in Costa Rica. He entered the team through the youth system at 9 years of age. Mario played for each age group and became the starter and captain of Saprissa’s second team, leading to his professional debut with the first team in 2016. Mario played in the U-20 CONCACAF World Cup Qualifiers and participated in the 2017 U-20 FIFA World Cup in South Korea with Costa Rica’s U-20 National Team. Mario looks forward to becoming a professional soccer player and is currently pursuing his masters in sports leadership.

We are excited to have Mario join the RGA staff. He is very skilled, knowledgable in the game and has a strong passion to help RGA and all of our goalkeepers grow and achieve their goals.
‍
Certifications: SafeSport Certified 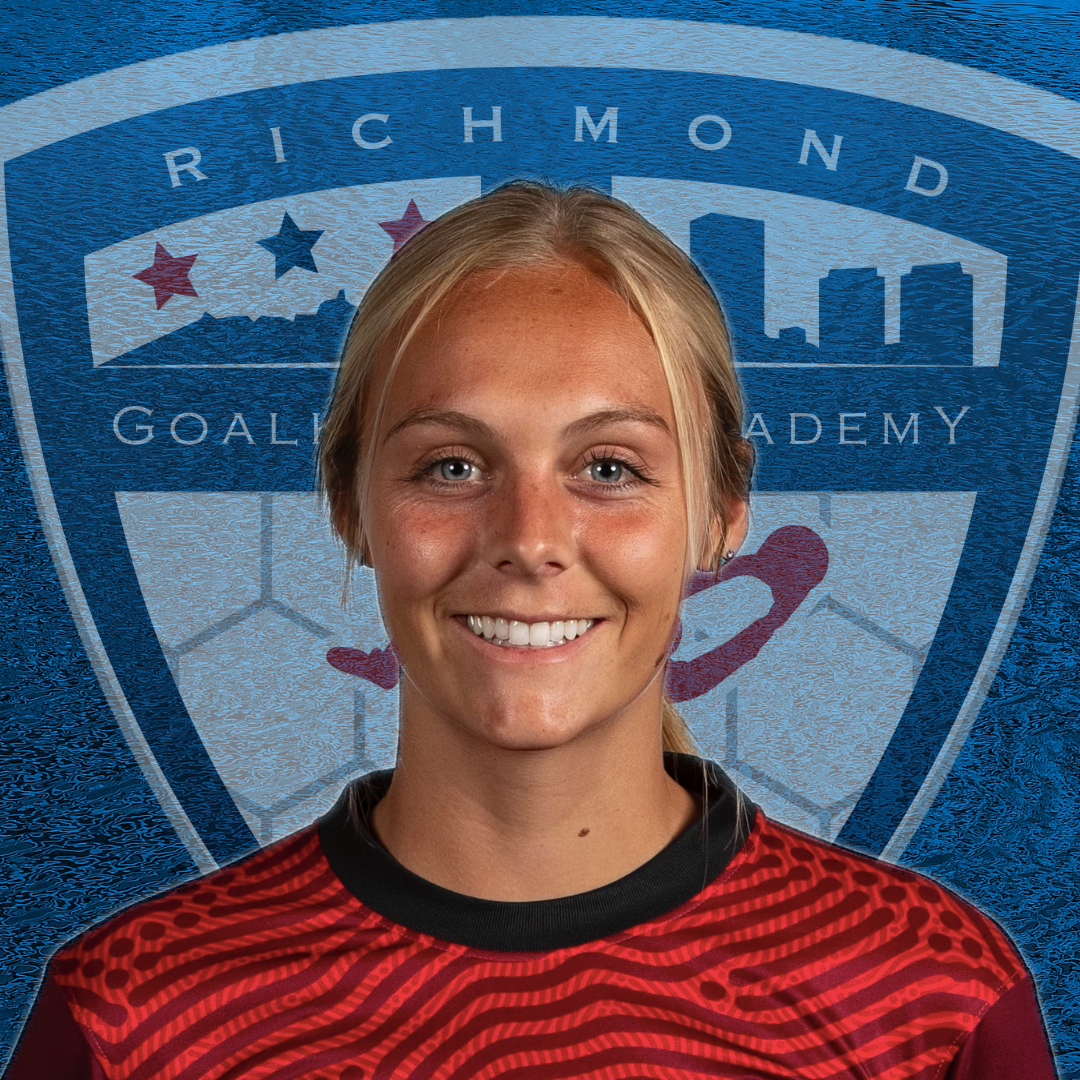 Melissa began her elite soccer journey while playing club soccer for the Del Mar Sharks in San Diego, CA. Melissa and her team won back to back National Championships in 2012 and 2013, and almost won a third in 2014. During this time, she was selected for ODP, Regional, and Youth National Teams. After graduating high school in 2015, Melissa earned a scholarship to play Division I soccer for Santa Clara University. She started her sophomore year and played through her senior year, in addition to being elected team captain in her junior and senior year. During Melissa's sophomore year, Santa Clara reached the Elite 8 in the NCAA College Cup, beating Number 2 ranked Stanford and breaking their 29-game winning streak at home. Melissa broke a university record for the women’s soccer team with 13 saves in a single playoff game. After 4 years at Santa Clara, she graduated a quarter early and left to play for the Utah Royals in the NWSL. In Spring 2019, Melissa signed her first professional contract and made her professional debut in the fall of 2020. Currently she is in her third professional season playing for the Chicago Red Stars.

We are so excited to have Melissa join the RGA team. Melissa will be in charge of the development and curriculum for our classroom sessions and working alongside our goalkeeping directors helping with the development of our ongoing training curriculum and programming. 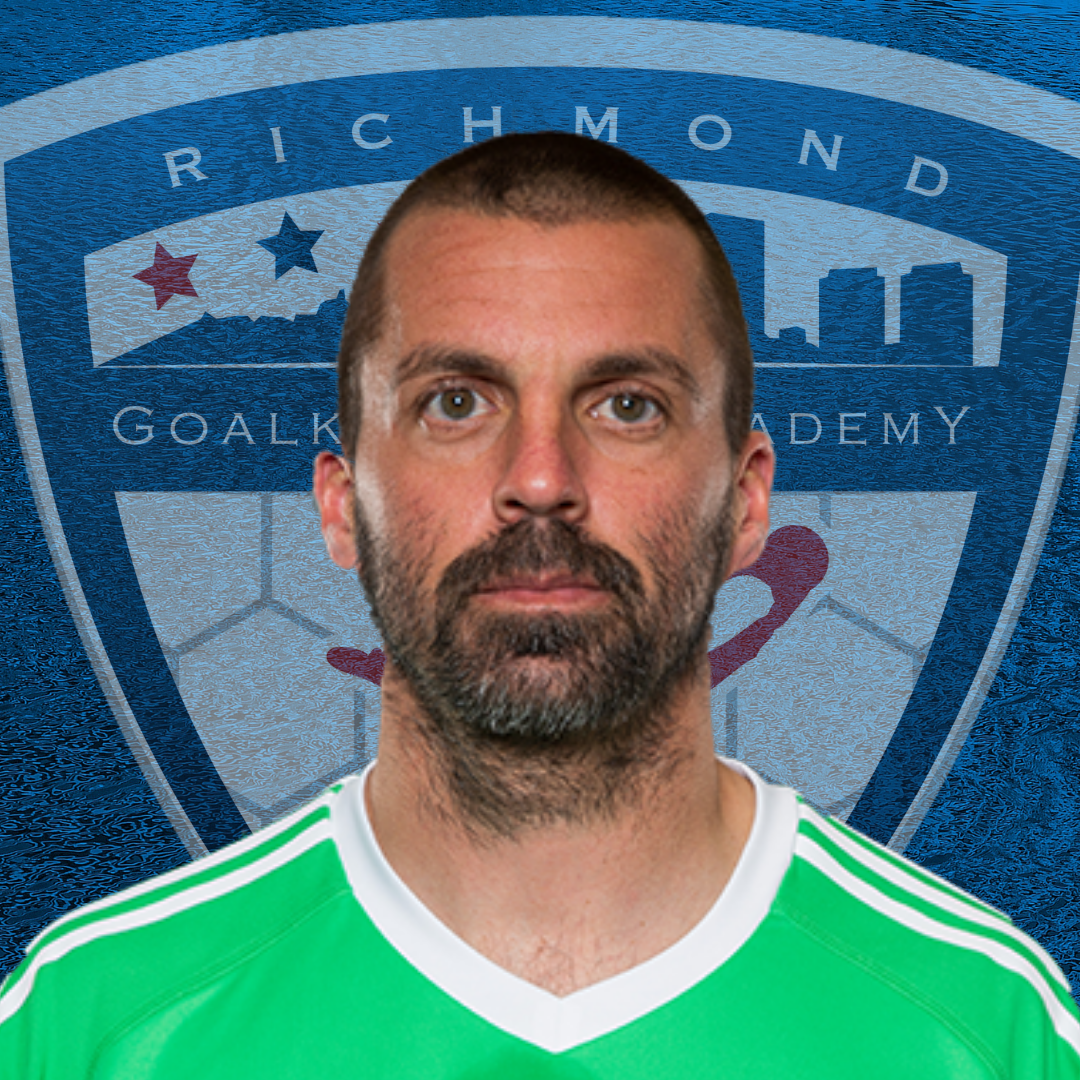 Busch is best remembered for his captivating saves, despite his shorter stature for an elite goalkeeper, and spent most of his 21-year professional playing years in Major League Soccer, appearing for the Columbus Crew, Chicago Fire and San Jose Earthquakes. Busch also represented the United States at both the youth and senior level. Arguably his best season was in 2008 when he was named MLS. Goalkeeper of the Year. As of the end of the 2015 season, Busch was ranked fourth in MLS history in number of shutouts. Busch earned his first, and only cap for the United States on March 9, 2005. He shut out Colombia in a friendly. He has also represented the U.S. at the U-17 and U-20 levels, as well as having played in the 1993 FIFA U-17 World Championship in Japan.  In May 2018, Busch made one last transfer move back to his first MLS club, Columbus Crew SC and retired from Major League Soccer. In 2019, Jon was named to the USMNT staff as the U23s and U20s Goalkeeper Coach. He continues to train US Soccer National Team GKs, MLS, NWSL, USL Pro Gks and is a tremendous asset to RGA GKs.  Jon has worked with the RGA team and GKs for the last two years at our camps and virtually assisting them with technical, mental and tactical training. We are excited to have Jon apart of our team and continuing to train our RGA GKs. Jon will continue to lead virtual trainings, our RGA @ Home program, and camps. 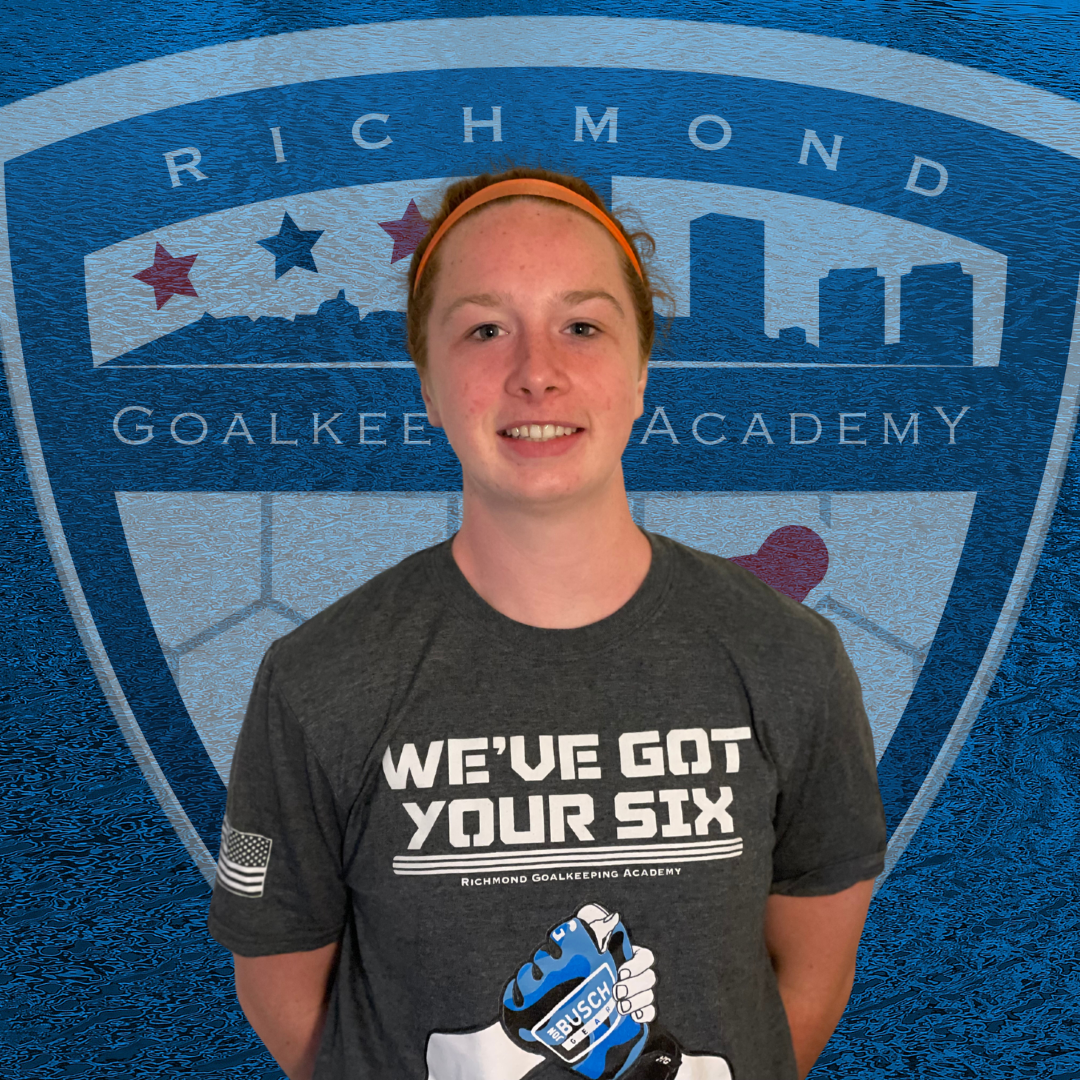 Laney currently plays soccer for an NCAA Division 3 school where she plays as a midfielder.She is currently pursuing a Bachelor's Degree in Criminal Justice. Laney has previously completed her internship with RGA and has worked at numerous summer camps and clinics as an assistant coach with our Junior Goalkeepers. Outside of School, Playing and RGA, Laney also coaches a JV Boy Soccer Team at Yorktown High School in Arlington, VA.

We are excited to have Laney join our staff. She has been very diligent throughout her prior internship with RGA. She has served our goalkeepers, parents, volunteers and staff through numerous events and always goes the extra mile! Laney is in charge of a lot of the behind the scenes administrative work at RGA and oversees our Current Interns.
‍
Certifications: CPR and Safesport Certified 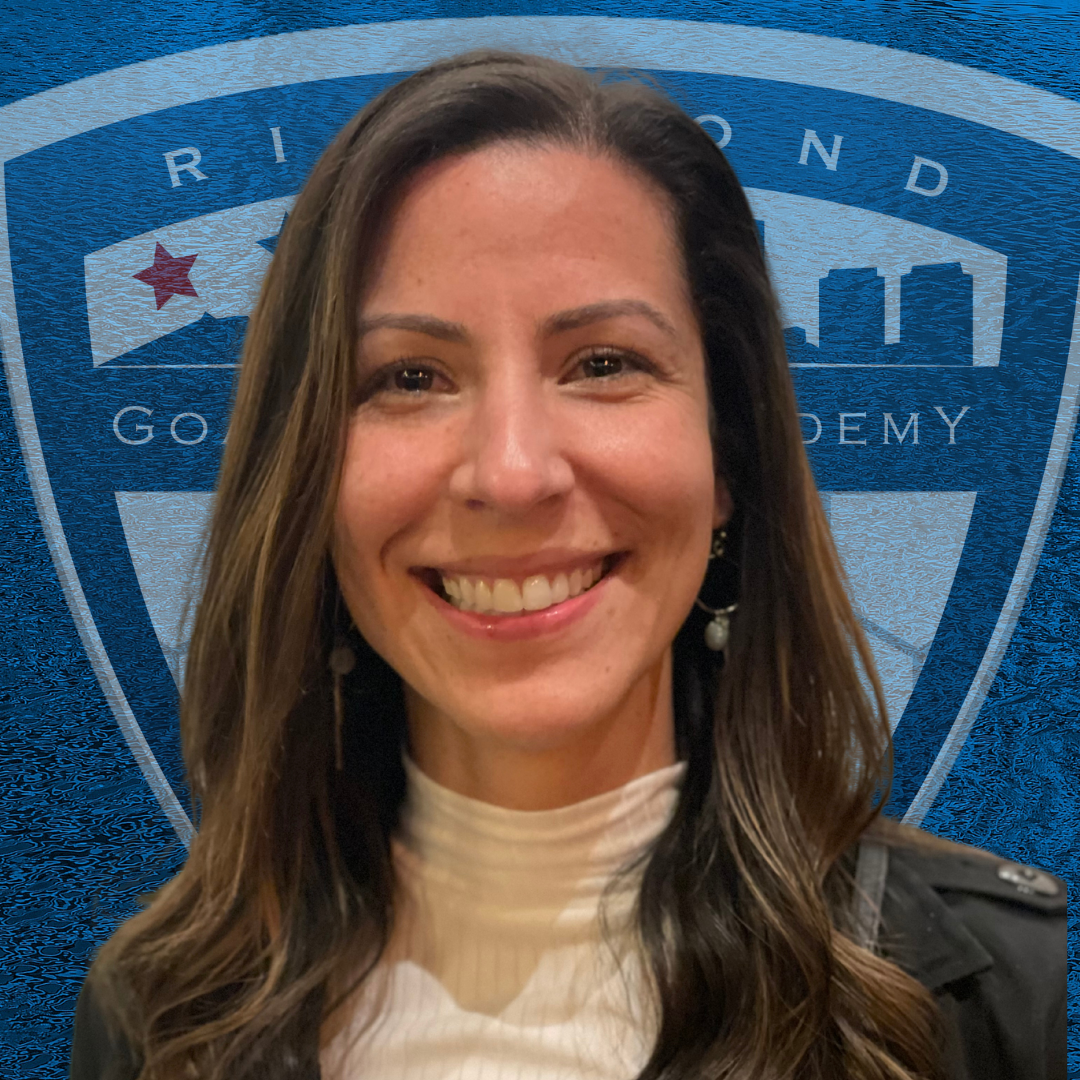 She is a NASM certified personal trainer, a Mobility WOD Movement and Mobility Specialist, and is certified in Biomechanics and Human Movement, DBC Level 1.Alice is currently pursuing her doctorates in physical therapy. She is a huge asset and brings so much to our academy and gks. She will be leading the small group strength and conditioning sessions and is also available for private lessons with GKs, Field Players, and parents as well.

Alice resides in Richmond,Va with her husband and two sons. She loves family, fun, adventure and helping individuals achieve their personal and physical goals. 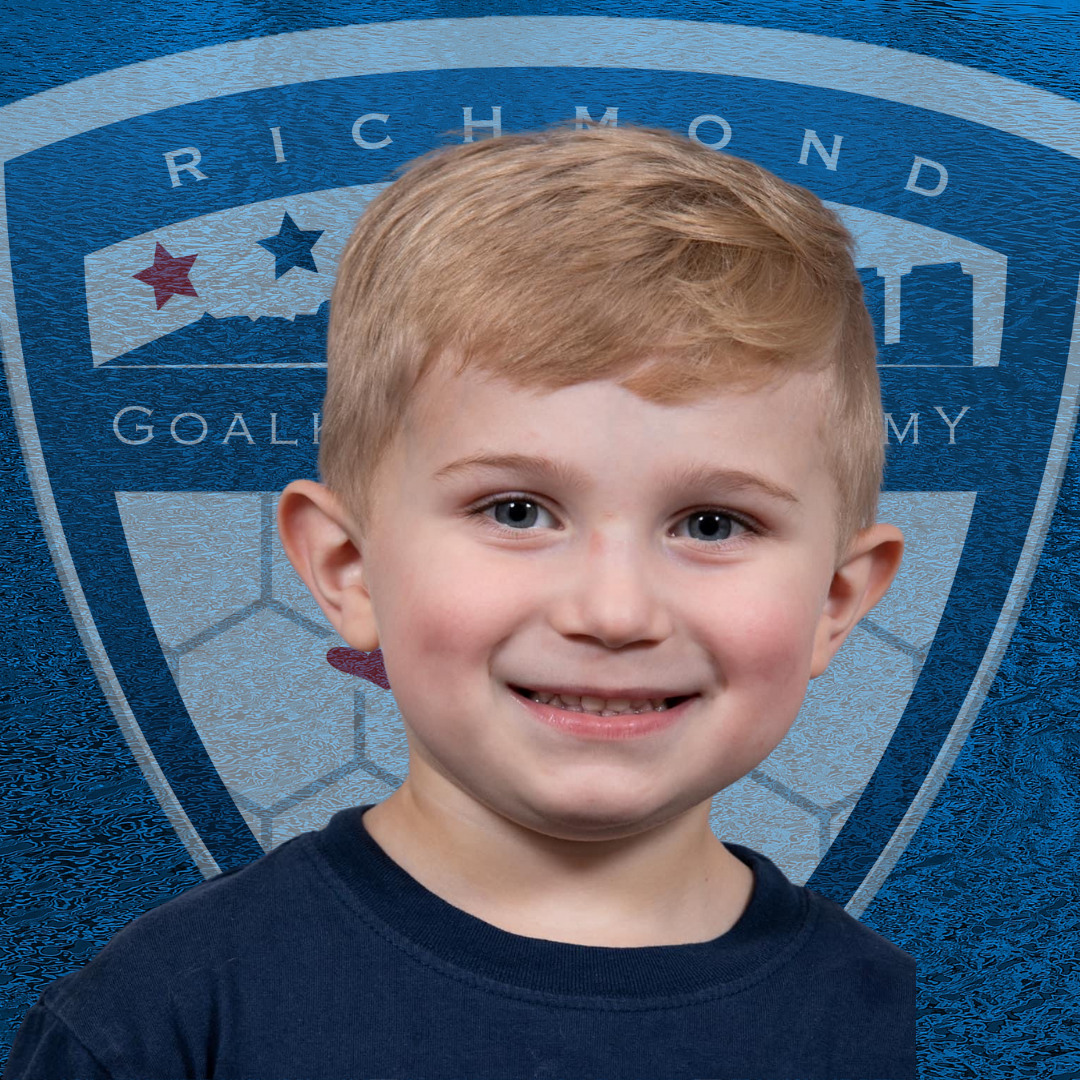 RGA's unofficial ceo and sometimes self-appointed head coach of the junior group,
and boss of telling all Goalkeepers "do it again and give me 10 push-ups".

Coach Amanda's infamous nephew, named by the RGA Family as the "LIL CEO" can be seen driving his white powerwheels Mercedes SUV around the field, lending encouragement, motivation and push-ups to all of our goalkeepers. He is bound to make you smile and remember your love for the game! 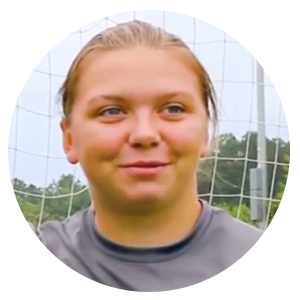 Yulia has been a stand-out goalkeeper and known by many as an incredible encourager, role model and friend in the Central Virginia Soccer community.

She has excelled academically and on the field. She finished out her senior year at Banner Christian and with the U19 Richmond Strikers Elite Team, VA Central District and State ODP and former Division 1 Goalkeeper.

Yulia has been a Richmond Goalkeeping Academy GK Student for more than 7 years. Her knowledge and love for the game and next generation is something special and unique in itself. In addition to Coaching for RGA, she has returned to coach at Banner and other schools in Richmond as well.

We are privledged and honored to have her apart of the RGA Coaching Staff.
‍
Certifications: Safesport Certified
"Under Amanda's tutelage, my son progressed rapidly from academy GK to first string travel GK. His understanding of positioning and ability to read the intentions of players grew in ways that hard work alone could never have produced. Considering the cost of annual soccer dues, every hour with Amanda was a bargain."